The Tax Cuts and Jobs Act

The Tax Cuts and Jobs Act legislation was signed into law on December 22, 2017. The Act makes extensive changes that affect both individuals and businesses. Some key provisions of the Act are discussed below. Most provisions are effective for 2018. Many individual tax provisions sunset and revert to pre-existing law after 2025; the corporate tax rates provision is made permanent. Comparisons below are generally for 2018.

Pre-existing law. In general, personal (and dependency) exemptions were available for you, your spouse, and your dependents. Personal exemptions were phased out for those with higher adjusted gross incomes.

These provisions sunset and revert to pre-existing law after 2025. 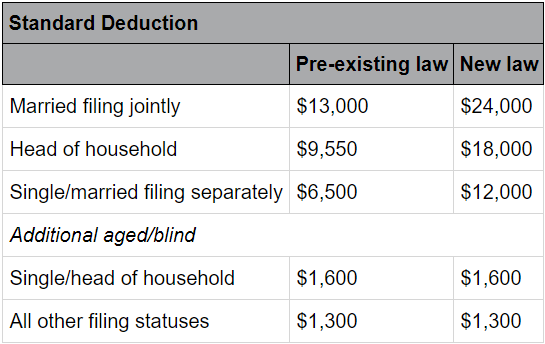 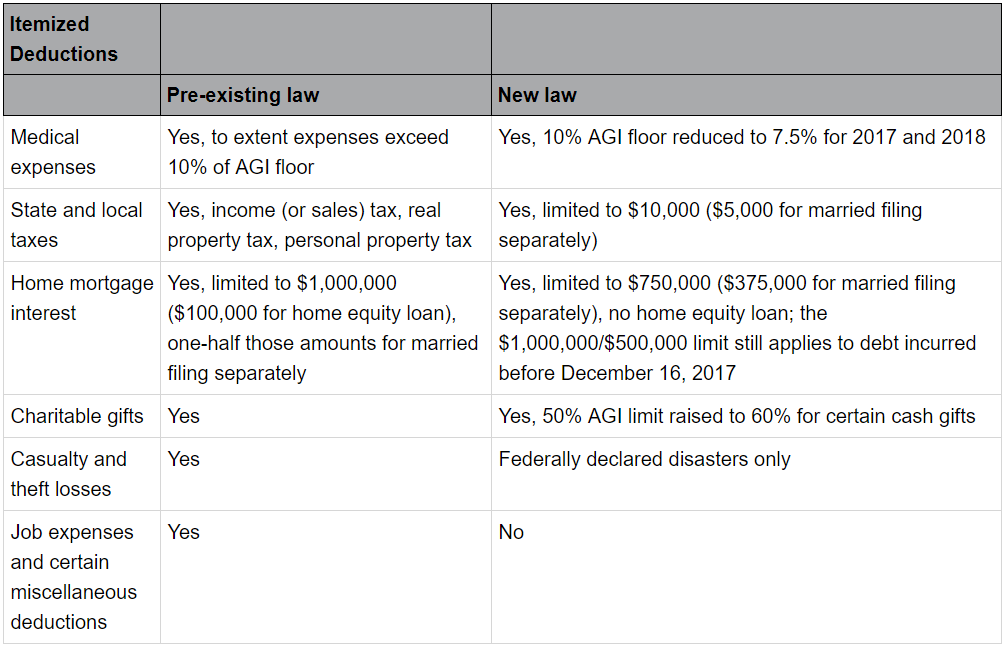 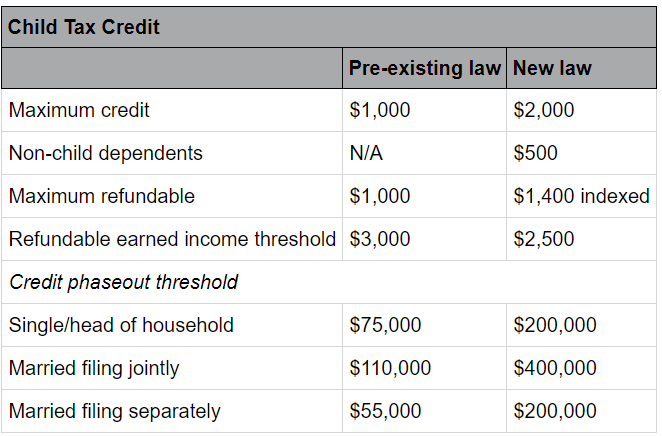 Under the Act, the alternative minimum tax exemptions and exemption phaseout thresholds are increased. The AMT changes sunset and revert to pre-existing law after 2025.

Under the Act, corporate income is taxed at a 21% rate. The corporate alternative minimum tax is repealed.

Under the Act, an individual taxpayer can deduct 20% of domestic qualified business income (excludes compensation) from a partnership, S corporation, or sole proprietorship. The benefit of the deduction is phased out for specified service businesses with taxable income exceeding $157,500 ($315,000 for married filing jointly). The deduction is limited to the greater of (1) 50% of the W-2 wages of the taxpayer, or (2) the sum of (a) 25% of the W-2 wages of the taxpayer, plus (b) 2.5% of the unadjusted basis immediately after acquisition of all qualified property (certain depreciable property). This limit does not apply if taxable income does not exceed $157,500 ($315,000 for married filing jointly), and the limit is phased in for taxable income above those thresholds. This provision sunsets and reverts to pre-existing law after 2025.

Under the Act, the contribution levels for retirement plans remain the same. However, the Act repeals the special rule permitting a recharacterization to unwind a Roth conversion.

The Act doubles the gift and estate tax basic exclusion amount and the generation-skipping transfer tax exemption to about $11,200,000 in 2018. This provision sunsets and reverts to pre-existing law after 2025.

The Act eliminates the requirement that individuals must be covered by a health care plan that provides at least minimum essential coverage or pay a penalty tax (the individual shared responsibility payment) for failure to maintain the coverage. The provision is effective for months beginning after December 31, 2018.

Back Door Roth Conversion May Close

Among the many provisions in the multi-trillion-dollar legislative package being debated in Congress is a provision that would eliminate a strategy that allows high-income investors to pursue tax-free retirement income: the so-called back-door Roth IRA. The next few months may present the last chance to take advantage of this opportunity. Roth IRA Background Since its … Continued

The House Budget Committee voted to advance a $3.5 trillion spending package to the House floor for debate. We review the proposed changes.

With 2020 coming to a close, we have published our annual guide to all the key numbers for 2021 and we review 2020 charitable giving strategies.